News about support of enterpreneurs

Last year, the Czech-Moravian Guarantee and Development Bank (ČMZRB) provided Czech enterprises with a record volume of support exceeding CZK 51 billion  (app. EUR 2 billion) of direct or guaranteed loans. In total, it helped to finance 10,636 business projects. Prevalent part of the support was used by small enterprises to cover their operating expenditure. According to the Czech National Bank, the risk of the so-called credit crunch was successfully eliminated also thanks to ČMZRB programs.

In prevalent part of projects (95%), ČMZRB provided its support in the form of guarantees to commercial banks´ loans. Remaining part consisted of directly provided preferential loans. “Guarantees are the most commonly used financial instrument across all developed economies. One of its benefits is facilitating entrepreneurs’ access to credits, and at the same time motivating banks to lend. This is important especially in times of economic recession. When measuring the success of guarantee schemes´ implementation, the primary aspect should not be the used share of the total capacity, but assessing whether commercial banks´ aggregated loans issue was limited or not compared to pre-crisis level. CNB’s statistics clearly show that the risk of the credit crunch, which is increasing during the crises, was successfully averted last year also thanks to our bank’s programs,” says Jiří Jirásek, Chairman of the Board of Directors and CEO of ČMZRB.

The main beneficiary of ČMZRB support is the segment of small enterprises, i.e. companies with less than 50 employees. “Most of projects (87%) that we helped to finance through our programs were implemented by self-employed persons and small enterprises. These entrepreneurs drew rather smaller loans with average size CZK 3.4 million (€ 130,000).  A half a percent of projects was implemented by large companies, the remaining support was drawn by medium-sized enterprises (12.5%). Their average loan amount was over CZK 13 million (€ 498,000)”, explains Jiří Jirásek.

Increased demand for working capital financing
Due to the situation on the market in 2020, Czech companies ran into problems with cash flow. Thus, the demand for working capital financing was increasing. These expenses cover CZK 47 billion (€ 1.7bn) from the total amount of CZK 51 billion (€1.9 bn). The remaining CZK 3.6 billion (€ 134m) were then used by entrepreneurs to acquire new machinery, technologies, licenses, software or to build / renovate production facilities, storage halls and office buildings, or eventually to purchase a stake in a family business.

In geographic terms, the support provided in the form of guarantees or preferential loans went across all Czech regions. The largest number of such projects was realized in the South Moravian Region (15%), the Moravian-Silesian Region (13%) and in the Capital City of Prague (12%). Similarly in sectoral terms, the support went through all segments of business. However, it was most often used by entrepreneurs operating in the area of ​​retail and wholesale (37%), in the manufacturing industry (23%), construction (12%) and in HORECA sector (8%).

Over two thirds of the support provided by ČMZRB in cooperation with the commercial sector to companies in 2020 came from COVID programs. Altogether, 6,574 projects were financed in the amount of over CZK 35 billion (€ 1.3bn) of directly provided or guaranteed loans. Entrepreneurs received another CZK 16 billion (€ 0.6bn) from the bank’s standard programs. Over 3,882 SMEs obtained support from them in this period. 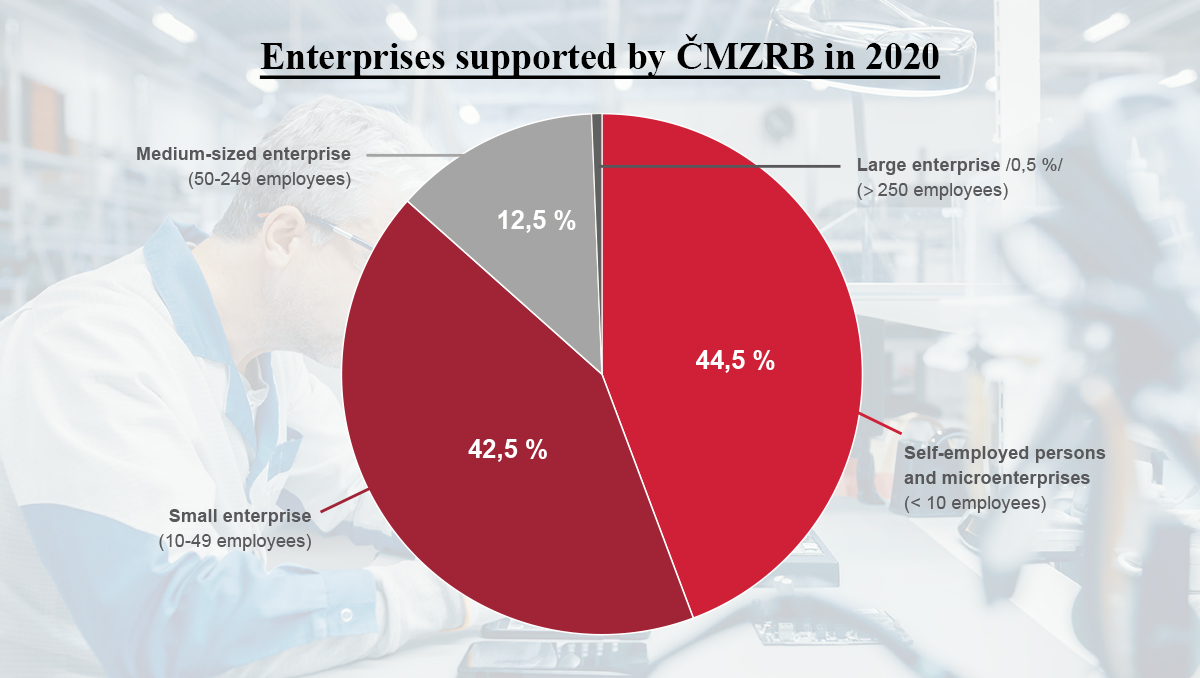 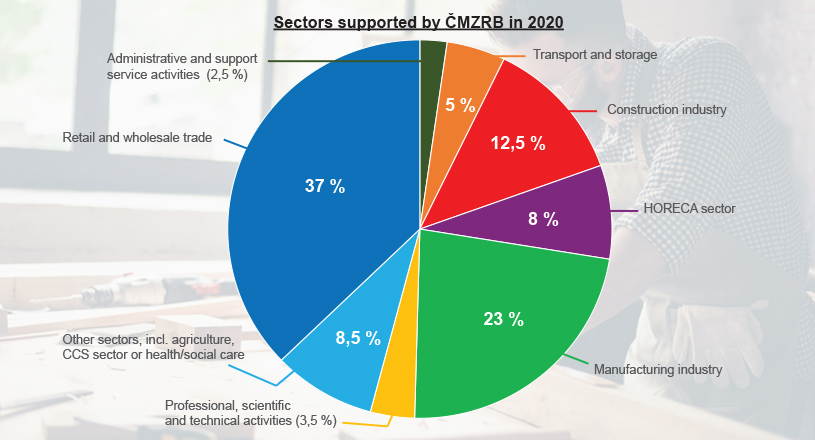 ČMZRB to support public infrastructure projects in the Czech regions